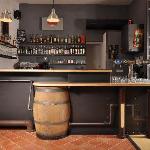 The origin of this well-known Prague inn dates back to 1895. The site in Vratislavova Street No. 12 was not chosen randomly for its operation. It is situated on the excursion to the national monument Vysehrad, which was and still is visited by Prague and Czech and foreign tourists. During the Communist rule, the inn was closed and refurbished to a school canteen, but it was canceled after the fall of Communism. Only in 2003 was the Old Bohemian excursion site re-opened after a sensitive reconstruction with the participation of the Monument Authority. To date, the inn was rebuilt in 2011